It’s here! September’s Infinity Crates has been shipped and delivered.

The exclusive theme for this month’s crate is Villains.

The exclusive Pop! Vinyl figure I received this month was Deadshot, the Suicide Squad version. I am in love with him as he was one of my favourite characters from the movie/comics. Along with Harley Quinn and The Joker of course. There are different variations of Deadshot, I received the unmasked version. 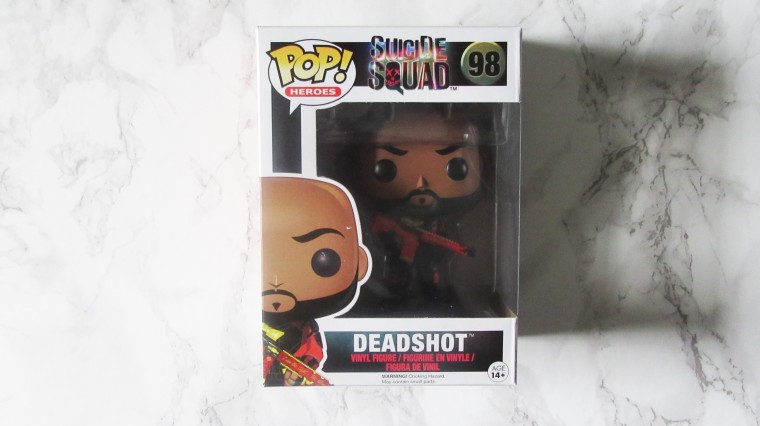 Along with being guaranteed a Pop! Vinyl figure, you also receive a T-Shirt. This month I received one with The Joker on the front. Now how cool is this! From the moment I saw it I just fell in love because Joker is amazing. The colour of the shirt is quiet unusual, it’s a lilac, to me either a black or grey would have gone better!

I have noticed though that even though it’s a large, it is massive! I have received four shirts previously from Infinity Crates all large and they all fit me perfectly. The company producing the shirts has changed so I’m guessing this is the reason behind it? Hopefully next month the shirt will be fine!

Now something that I received that was quiet special and different was a Storm Trooper snapback. How cool is this, since subscribing they haven’t include a hat so this was nice to see. I won’t really see myself wearing this but it’s a cool design so I think it will go on my shelf along with the other cool caps I have collected.

I also received small cute small items, firstly two pretty cool A5 posters. One of Spider-Man and the other of Darth Vader, now how cool! Can’t wait to get a frame for these to display them, they will look pretty cool on my walk along with the other artwork I’ve previously received.

Now there’s only two more items left in this box, a packet of sweeties! How cool is this, first time I received these in a box, only problem, I don’t like them. How disappointing receiving sweets is always cool. They are a hard boiled sweet rather than being soft and chewy like I though.

The second, a fridge magnet that says Team Negan. What does that mean? Well your guess is as good as mine!  Rather than leaving you in the dark, I Googled it. Well that’s a disappointment, Negan is a character from The Walking Dead. Proves how long ago I last watched it. I need to start watching again.

I would like to just say I am a little disappointed with the box. With the theme being Villains they could have done so much more. There’s so many good Villains out there and I just don’t feel they’ve opened the Villain box very big. I am happy with the pop and tee though, so at least I have got my money’s worth in that respect this month.

If you would love to know what I received in previous crates, head over HERE to see August’s Infinity Crates.

That’s it for September’s Infinity Crates!  If you’ve liked what you’ve seen why not subscribe, it’s a subscription box that I look forward to receiving every month so I hope you would too! You haven’t got long left to subscribe for the October crate so what are you waiting for, head over to their official site HERE for more information.

One thought on “Infinity Crates September 2016”