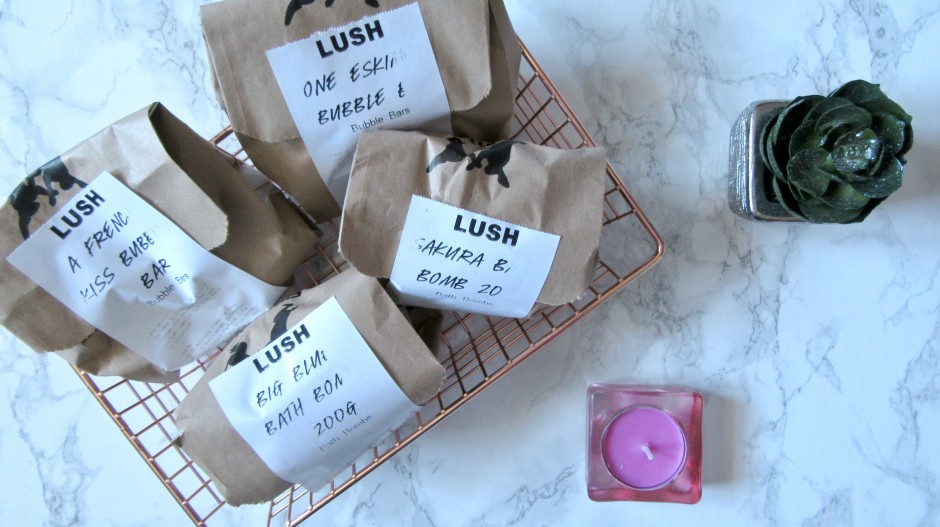 I think there’s a theme going on here, recently I visited Westgate in Oxford, a recently remodelled Shopping Centre. Now, it opened late last year, perfect timing for Christmas! For an exploration though, not good timing, I’m not a fan of busy and crowded places, I’ve said to Yasmine since I heard about it’s re-opening, we should go and visit. Finally, we had the opportunity to go visit!

I’m not going to go too much in depth about Westgate and my adventure there, as you’ll see from the title, this post isn’t about that. Some could say it’s about something so much better! That’s right I’m talking about LUSH, somewhere I’ve become addicted too since leaving Plymouth actually. We’re not lucky to have one in Aylesbury, our closest is either Oxford or Milton Keynes. Depending on what way you want to go!

END_OF_DOCUMENT_TOKEN_TO_BE_REPLACED

When I attended the launch of the Holland & Barrett More store in Plymouth, I received a cute little goodie bag. In the bag there were a variety of different items that they sell in the store. The theme of the bag was coconut which might not be to everyone’s taste but was definitely to mine. Everything inside was made from coconut in different ways.

There was a big bag of Sweet Coconut & Vanilla flavoured PROPERCORN, it was nice to see a big packet as I just love their popcorn. There’s such a nice taste to it, I really enjoy eating them and if I had a choice over a supermarket’s own popcorn and this. I would definitely go with Propercorn. The taste of Vanilla does not over power the taste of Coconut which is nice as sometimes when there is meant to be two flavours you can only taste one.

It’s not just the taste that’s good, it’s also the fact that it’s gluten and wheat free. They are also suitable for vegetarians. The packaging is very appealing and it stands out, whatever the flavouring is there are illustrations on the front to go with it. For each of the flavours there are different colour schemes, which relates in some ways to the flavouring.

From Coconut Merchant there was a bag of Coconut Chips, I wasn’t too sure about these but once I opened them up and tried some, they weren’t actually that bad. They come in all different sizes which shows just how natural they are. They also advertise that their products don’t include any preservatives or artificial flavours. So you know what you’re eating here is a coconut rather than something they’ve created to taste like a coconut.

It’s in a cute resealable packet which is perfect for travelling or just a light snack throughout the day. For me, I couldn’t eat the whole packet within a first sitting so I do like the fact that it is a resealable packet. It’s great to just stick in the cupboard and not worry about them loosing their flavour. As long as you remember to reseal it probably!

While I was wondering around the store, I came across Bounce Energy Balls cute little protein balls that come in a variety of different flavours. I was pleased to see one of these in the goody bag as it’s always nice to try something different. The flavour I received was Coconut Lemon, now I’m not really a massive fan of Lemon but I thought I would give it a try.

I didn’t enjoy this as much as I thought I would and I believe this is mostly because the lemon flavouring is quite overpowering. There’s a nice smell of coconut when you open it up and when you first bit into it, the coconut flavour is nice. But then you get the strong after taste of lemon though and it just wasn’t nice for me.

There was more than just food related products in the goody bag. There was a massive jar of Coconut Oil from Perfectly Pure. which along with being good for cooking, can also be used as a moisturiser. To me this seems a little odd as it is labelled as Coconut Oil on the front, but once you read the directions, it is possible to use it as a moisturiser.

I have yet to try it for myself but looking around, I have read that the oil is quite good for your skin and hair. Including dry skin, something that I do suffer from. Also it’s apparently good for your hair as it gives your hair a shiny quality.

The last product that was supplied was a lip balm from Dr. Organic, a product on their Bioactive Skincare range. This is a cute lip balm that includes coconut oil, it is small enough that it’s a perfect size to put into your handbag. When you twist it up you can smell the coconut flavouring, it’s just perfect.

It’s not a wet lip balm that you sometimes find, where you can add too much if you’re not careful. It’s just the right consistency to add to your lips. The oil is said to improve hydration, firmness and tone.